The Lismore City Concert Band has been supporting the Lismore community for a long time now, since John Allen founded it in 1979. This year we got together members, new and old, to remember some of the good, funny and successful times.

The day started with the committee members arriving early to set up a display of our rich history. Certificates of thanks from businesses or event participation, trophies from various eisteddfods and events, many photos of the band throughout the years (both professional and some great personal photos) and some of our instruments on display.

Then current and ex-members started arriving, as well as our invited guests – some of the band’s previous musical directors.

We celebrated with some champagne and snacks, and the current LCCB Committee President, Mark Lindbergh gave a short speech before the five present ex-directors cut the cake.

After everyone had caught up with each other, enjoyed the cake and had a chance to look at the display we moved into the Concert Room where the current band was joined by some of the past members, and each of the conductors led us in a few of their favorites.

Finally we ended the day by joining the Lismore Lantern Parade and marching from the Memorial Bars across town to Oaks Oval.

Getting ready for the 2003 Lismore Lantern parade. 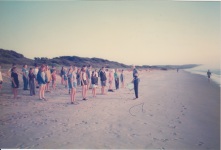 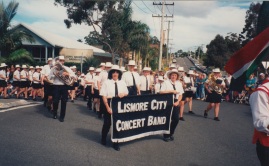 The LCCB in the olympic parade in Coffs Harbour 1997. 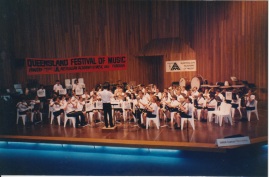 Brisbane festival of music in October 1994

Looking down the back line in rehersal

Trombone line at the Brisbane festival of music in October 1994

Leaving for the Brisbane festival of music in October 1994

At the Lismore South Public Centenary